You are here:
Buy To Let NewsHouse Price DataNewsProperty News 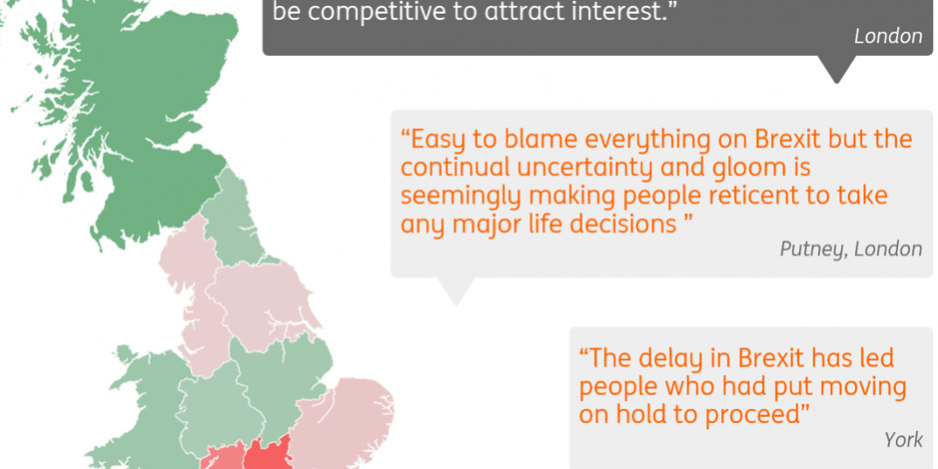 ING Bank has recently provided an overview of the UK housing market which makes for interesting reading, the full report is available here.

In summary the UK property market appears to be splintered as demonstrated in the following graphic, with projected periods of growth in the north being forecasted by most market commentators, with anticipated reductions in prices in the South-East.

Interestingly ING in their commentary appear to be focusing their thoughts on the factors that are driving the slow down on financial restrictions implemented in 2014 through the prudential regulation authority and therefore lenders are restricted in the finance which they can provide. ING also highlighted the additional restriction placed upon landlords with increases in stamp duty, removal of interest relief for investors holding properties in their own name, as well as an increase in interest cover implemented by the Prudential Regulatory Authority (PRA) for borrowers who are borrowing for buy to let mortgages in their own name.

The rules which the UK Government introduced regarding deposit sizes and the amount which can borrowed have throttled the housing market to some extent despite the continuation of the help-to-buy scheme which has created traction for first time buyers.

ING reports that over half of mortgage holders are on fixed rate products, so that would insulate many against potential interest rate rises which may be around the corner, this is a higher proportion of borrowers than many other countries which could be a saving factor in the fight against inflation.

ING believe that the Bank of England is likely to “keep a hold on rates throughout this year” ING also reports a “20% probability of a no-deal Brexit”, ING then also reports if there were a no deal Brexit they would expect “house prices across the country to spiral downwards”.

The original article as linked above was written by James Smith who is a Developed Markets Economist.